Many experts consider the Korat to be one of Southeast Asia’s most original breeds. The contemporary silver-blue cats of satin fur and bright green eyes are not much different from their ancestors – the wild cats that inhabited the jungles of the Malay Peninsula and still roam there now. Today, Korats are rare even in their native Thailand, where they are believed to bring good luck.  There, the cats are more often called Si-Sawat: แมวสีสวาด  (Si meaning color; Sawat meaning prosperity). The name Korat, given by Rama V, the 19th century king of Siam, comes from the cat’s place of origin – the province of Korat in northeastern Thailand. Most likely, as a result of their camouflage, so effective against the plateau’s granite rocks, korats survived the times of prolonged wars that Siam (today’s Thailand) waged with its neighboring countries. 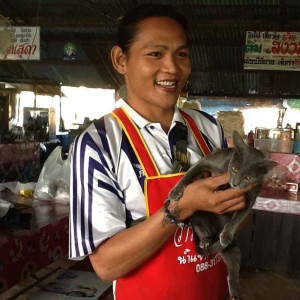 Korats, although rare and highly appreciated in their home Thailand, still roam there now. In  2012, Eva Krynda, a korat breeder from Australia, accompanied by a Thai Korat breeder, Khun Chuchai, and the author of Siamese Cats, Martin Clutterbuck, encountered a family of Korats in the vicinity of Phimai, living of left-overs from a nearby restaurant. Its owner offered Khun Chuchai a young male, which he considered valuable for his breeding program (photo: Eva Krynda).

The first mention of the Korat appears in the Tamra Maew, an ancient book from the period of Ayutthaya kingdom (1350-1767), now kept in the National Library in Thailand’s capital, Bangkok.  King Rama V (1868–1910), a great fan of cats, ordered a copy to be made of the original palm leaf manuscript to the hand-made khoi paper.  The book of poetry of cats named Smud Khoi can be seen at the National Museum of Bangkok today – illustrated therein are seventeen cats said to bring good luck, and six cats said to bring bad luck to their owners. Among the first ones is the Korat – described by the contemporary poet as having smooth hair, at their roots like the clouds, at their ends like silver; the eyes shine like dewdrops on lotus leaves.

The Thai believe that the Korat brings good luck because its fur is as silver as money, as grey as rain clouds – a harbinger of good harvest; and the eyes are as green as young rice sprouts. In Thailand Korats are truly appreciated. In keeping with tradition, they are presented to special people as a sign of great respect. A couple of Korats was once given to a bride and groom – the gift foretold a happy marriage and home full of children.