the Korat or the Russian Blue

These two breeds of blue cats differ significantly in disposition – the Russian Blue is a bit aloof, does not necessarily like to have his peaceful life disturbed and may be reserved towards visitors. The Korat is confident, sociable, balanced – and a real life spark. 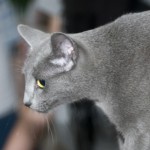 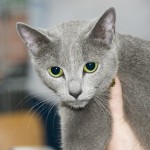 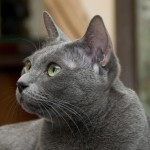 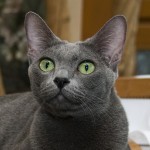 The Russian Blue has a supple body with a delicate skeleton, a long trunk and neck, and slender legs – though it may appear stronger because of its thick coat. The Korat is compact and muscular, but it does not appear heavy. The Russian Blue is characterized by straight lines; the Korat by the gentle curves over the whole body.

A few features make Korats different from any other of the blue cats: Russian Blues, Chartreux, British or Oriental Shorthairs. Only the Korat has the heart shaped face. The fur is single coated, which makes it lie close to the body. The Korat is a rare and explicitly pure breed – unlike others, it owes its purity to natural selection in natural living conditions. Its unique beauty comes from many centuries of living close to nature – untouched by  human interference.

More about the differences between the three cat breeds that come only in the color blue – the Chartreux, the Korat and the Russian Blue – can be found in the article at Show Cats Online. Various blue cats are also compared at What Blue Cat IS That?